So far this has been a sandwich

Over the past few weeks the amount of dramatics in my life has increased twn fold. I’m convinced this is due to my adventures in “personal time” which I might add is highly over rated.

The biggest drama at the FSG was the now famous Not-So-Pay-Day, rumour has it accounts forgot they had a bank holiday and screwed up all our wages paying in to our accounts. The lower paid masses (bookings) appearently became ferocious and somewhat rabid with the figure head of accounts. As a result a select few were paid. Thankfully I was but one of them as I made it quite clear that my rent was going out and that if I didn’t get at least £500 by the morning of payday I’d extract it in selling his organs on the black market. This saw that my account was credited in full (where as most other people only got about a 3rd of what they were owed. Nice.

The next set of dramatics comes from my home place. We have a new tennant. I call her cat lady, because she’s a bit mental, like a cat woman, but without the cats. Our first conversation was “You’re the one who lives in that room. I smelled you on saturday night, it was nice.” I could only laugh, but I was scared on two counts. 1) this defines our relationship and a string of blog posts to follow and 2) I wasn’t there saturday night.

I then was cornered in the kitchen with nothing but a can of meat balls to defend me. She discussed the murder at the end of my road, I tried not to be scared of her mentalness and it ended when I abandonned all hope on eating. Possibly this will be the best diet I’ve ever done! Thankfully, other than making me have to use the motorway on saturday morning because she had to wake up and have a shower/bath at 0730 on said saturday morning (WHO THE HELL IS UP AT THAT TIME?!) I haven’t seen her since.

Also, My Matt has got himself married on Saturday. I don’t think anybody got invited but hey, still love him. See, I can forgive, one person mind, but cometh the alien invasion (I’ll be lasering you human bastards with my new overlords) I wouldn’t rely on this being a re-occurance.

Last night there was a barbeque and it was sound. Some photos can be found below: 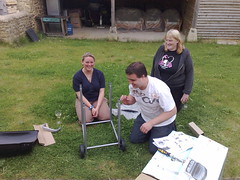 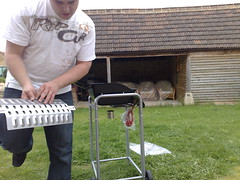 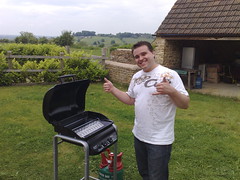 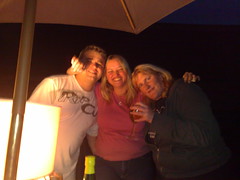 This ended well with me vanishing in to the bedroom and crashing out.  Thankfully I didn’t drink enough to go from midly happy person to CRYING PSYCHO BITCH like I’ve done on previous occasions.  Oh how I love my new found drunk stage.  Not.

It was actually a cool event there were only a few of us and all we did was sit out in the sun and talk outside of the grim walls of our current overlords - the place of business.  We’ll have to do it again.  But I’ll try not to ram so much meat down my gob this time.

Anyways, right now I sit here on my Mobile Broadband at work, typing away being so professional (ie I seem to be a bit shirty with some of the drivers this evening, for I can not explain why) at work listening to my god, Jonny McGovern, the Gay Pimp.

Now, me so hungey.  I might steal some food from people…….

Originally published at Кевин.com.ua. You can comment here or there.