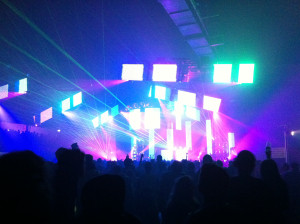 Last weekend I went out for Birthday drinks with Harriet and managed to get drunk enough just to go and book Westfest tickets without fully recognising the financial implications of what I did.  But it was totally worth it.

My ears are still ringing (I've clearly got myself on to the path of hearing loss) and some of the hilarity is still fresh in my mind.  Nothing is funnier than a room full of people on E!

While we were in the queue getting in, I saw this large (muscular/tall) chap who clearly was embarking on his first pill ever.  He had to dash for a bit in the queue as it started to hit but by the end of the night I saw him outside the main arena cuddling a glove, imagine 6'Huge" man built like a brick shit house showing a glove some love.

I had the usual touchy feely stuff which in any other social gathering wouldn't be acceptable, but somehow just normal in a rave.  I also found a woman questioning the existence and meaning of her car keys and seemed in awe when I found her a lighter and made magical fire!

There are some fantastic photos I've uploaded and a video too, so have a peek.

This week hasn't been so interesting or successful, I've come down with a cold and shortly followed by some annoying sickness bug.  I also had the council around on Thursday to look at my ceiling leak; which they are now going to handle.

I've spent the last three days under a duvet feeling like rubbish and this weekend I've got to get up to buying things like shampoo and toilet cleaner.  I ain't feeling it.