This is what happens when you block comments

Somebody ends up blogging about you. Just sayin'.

If you don't know who he is, he's a man who made a scene in a restaurant over Google Glass.

I've kept my mouth shut about most of the glass related flap as there are some things he posts that aren't entirely whiney and interesting. But now in my mind, he's just a temperamental little man boy who needs to sit the fuck down and have a cup of tea.

To say when I saw the post by chance I angrily frothed at the mouth would be an understatement.

The link he posted was to this story, about a restaurant owner who is an utter douchebag of the highest standing. When he's not discriminating against the disabled he moves on to those other cliché minorities like the gays and anybody with a slightly off white skin tone.

But back to why I'm taking the time to read Nick here. Nick posted this link with a commentary that read this guy sounds a lot like David Meinert of Lost Lake Cafe & Lounge and The 5 Point Cafe (tagging all three names in the post). Somehow trying to equate his "human right" to wear Google Specs to that of actual discrimination and trampling of people's human rights not to be discriminated against in their day to day lives.

And if you don't believe me, we cool as I have a screen capture. 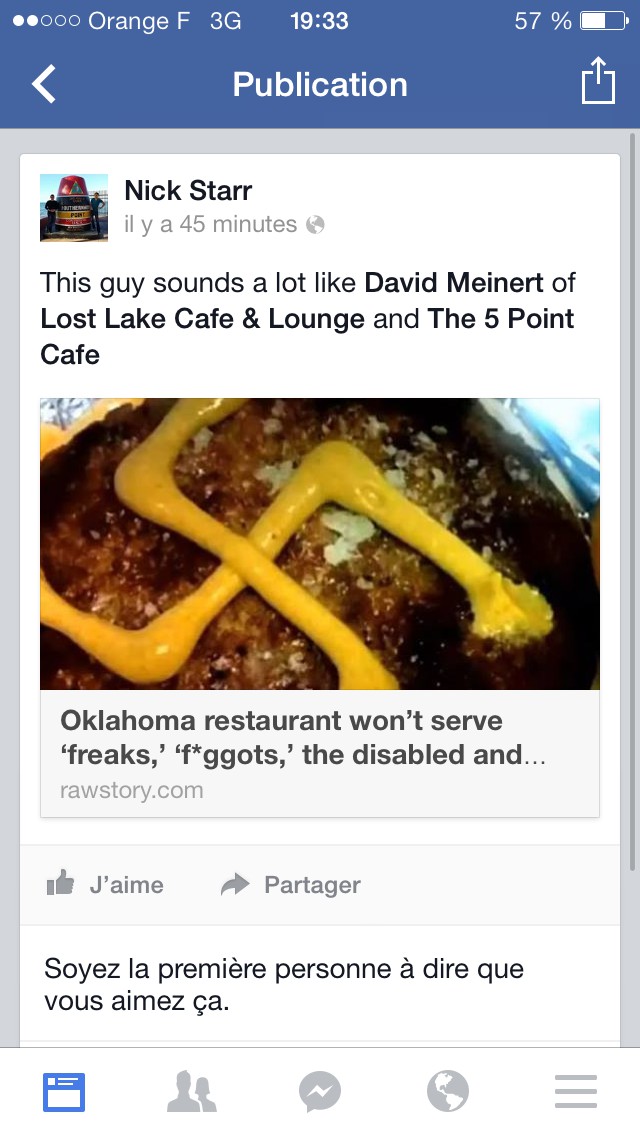 How in the name of holy Jeewah (mouse god of destiny) can you equate your little kerfuffle in a restaurant that has every right to ask you to take off an un-necessary toy; to a very real struggle by countless people on this planet in the past and present fighting to be treated equal as human beings is so fucking beyond my head, I actually can't comprehend it.

What kind of spoilt brat syndrome must he be under to see these events as being on par with each other? How self-absorbed can he be to have to be the most hard done party in any non-related event?

I can't even put in to words the utter shame and contempt I have for that post, so I think I'm going to leave this here.