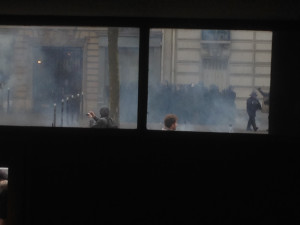 This is just outside my front door, quite literally, and seemed to be some of the worst kind of violence since they directed their anger at a hospital for sick children of all things.  I took a few photos and they don't quite tell the story of how crazy things were.

There were a group of people hiding themselves in the lobby area of my building, each time they opened the door a flood of CS gas came wafting through the halls and sat there for a while, most of the buildings occupants decided against leaving their appartments or were not around when it kicked off as it was a good two or three hours before you could move out of the building, let alone get off boulevard du Montparnasse to get anywhere else as the Gendarmes had blocked off all the side streets.

When I managed to leave for work it was a pretty odd experience as when I got through the police blockades Paris was still moving on with the adjacent street quiet and with terasses open as if nothing was going down only metres from them.

On my way back home from work I finally got to see what was left behind, buildings with stones torn from them, grafiti everywhere, windows broken and rubbish everywhere.  But this being the 6ème by the next evening pretty much all but a few things were left to be cleared up or fixed.
The actual manif had a point, the gouvernment trying to bring in a law that nobody wants and that will put young people on terrible contracts akin to those in the UK with vaguely any protections, then foricing it through using 49.3 to avoid the democratic process, yes I get that and manif that to the end.
But the goons who are out just to trash shit, that's not what this is about, especially targeting Hôpital Necker des enfants malades.
Also posted to The Horrible Restaurant Guide & Le Guide des Restaurants Horribles.
Tags: 75006, boulevard du montparnasse, hôpital necker, manif, manif 14 juin, manifestation, paris
Subscribe