What Has Been Occurring?

As usual it has been a long old time since I have actually posted something on to this long running LiveJournal, I've had quite a bit on my plate so between being sick and exhausted I didn't have much time to function and think more than a crappy Facebook status or a report.

Sorry about that folks, so here is the run down. 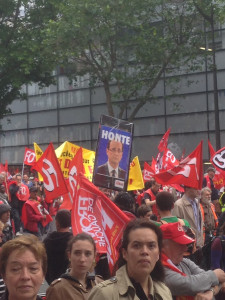 There was a rather large manif on the 14 june over the loi travail being forced in to play by the government using the article 49.3 to force through an unpopular modification to the law.  Basically no syndicate agrees to it and it's got people pretty heated up as expected.

But then there are the casseurs who join in to protests like this and just destroy shit.  This was no exception and I woke up with lacrymogène in my room from where the police were having a bit of a gas and projectile volley with the casseurs.

Not really what I was expecting to wake up to on that day and it nearly made me late for work.  There are a few photos I took of the protest from my gates and the aftermath.

The next event was pretty much life as usual, but I ended up coming down with some kind of god awful virus and to further get in my way of being able to leave my apartment, I had an allergic reaction to my washing powder.  So here I am with the ritualistic vomits and covered in a rash head to toe.  I can't say that was the best time of my life, but we all have to deal as we go.

I'm also now on the job hunt as I need something more stable and less night based.  My sleeping patterns can't take this any more, if I want to be up during the day I need to either not sleep the day before, disco nap or go full nuit blanche in to the following morning.  And that is being far too troublesome to be healthy or allowing me to fully function as a human being.

This is why I have a particular urgency to rectify my sleeping needs, because try being in an interview when there is no functional language working in your head and baggage under your eye balls, it's not a recette pour succès as they say.

As for today, you probably guessed I'm playing the 'how long can I stay awake before I have to nap or can I continue my day as a zombie' game.  I'm not too sure of the success of this as I can't find enough to keep me occupied on television until I crash out.  Sigh.