I have broadband with everybody's favourite network Three.  Until about the middle of February everything was fine and dandy with the connection, broadband speeds as the network was upgraded perfect.  Then for no reason a problem came out of the woodwork.

Now I have a WIFI router box that I use at home which does all the normal broadband router bits but using the USB modem to make it's connection, this box at no point drops the connection.  This is the important bit, the connection REMAINS ACTIVE with an IP address assigned to it.  But what happens is the connectivity just ceases to be routable, nothing in and nothing out and the only way to fix it is with a reboot.

Now this is a problem when you're not always at home and spend the time working over SSH and VNC on your home computer, last time it died I wasn't able to sort it out for over a week.  I called 500 (broadband support) who blamed my cookies and internet files for this issue, because obviously COOKIES BLOCK THE INTERNET PIPES which leads to unroutable IP addresses.

So now, the only work around, which no doubt has ruined any kind of warranty on my wifi box (and which will stop working when they do a firmware update) is to get my computer to run a telnet script that uses the routers TTY interface to force a software reboot and thus a new IP address is obtained and the cycle resumes.

Now this issue is RANDOM, don't get me wrong it ALWAYS does it now, but the unroutability thing can be anywhere from 6 minutes in to the connection to 6 days.  And it's not for lack of activity, something is always looking to access something online, MPOP polls gmail every ten minutes, the iMac does a webcam upload every ten minutes, etc.

But of course, trying to get somebody in an indian call centre who only reads from a script to understand this, is not going to happen.  And actually it's bloody annoying and I'm now shopping around for a fixed line solution.  When Three screw up, they don't do it half assed.

Anybody else in the country experienced this.  I'm in BS1, which according to Customer Service "has no issues" when clearly there are.

Edit:- This is what I'm talking about... 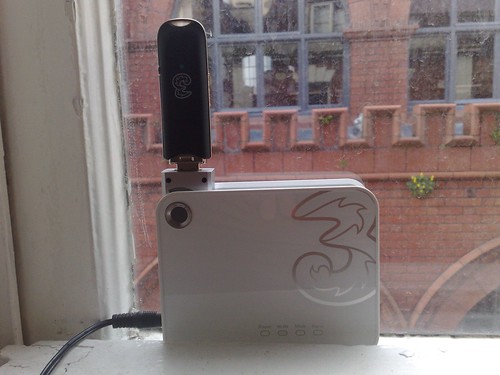 Six hours after my router rebooted last it went down again. OK I thought it will do a reboot at 9pm. Did it fuck, either the network blew up or i fried my router.

Edit: It rebooted this morning. The connection was up for SIX minutes before it went unroutable. It's a joke.
Collapse